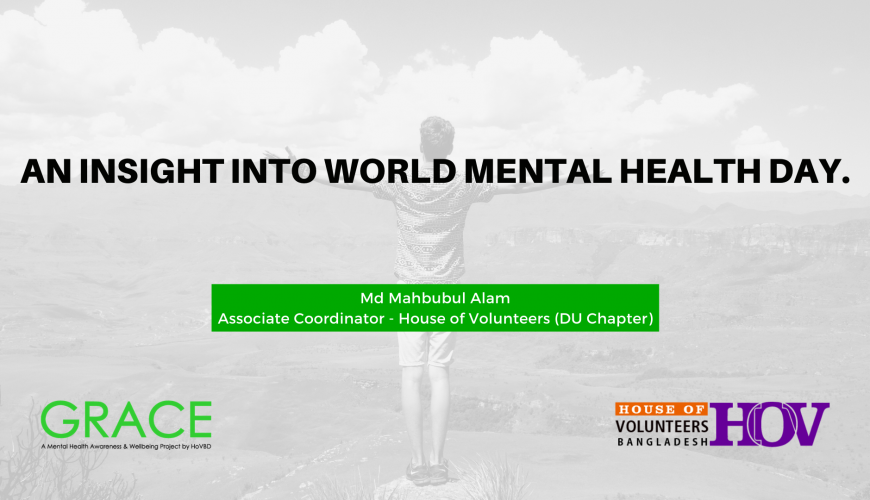 World Mental health day is the day we observe globally to raise awareness about mental health problems, advocate against related social stigma, promote mental health education and encourage other relevant activities. It is an international day, meaning that the day is observed all around the world on the same date with the same intent. World Foundation for Mental Health (WFMH), a global organization working on mental health was the first to take the initiatives to observe this day. First observed in 1992 by WFMH and its members in about 150 countries, the event gathered huge support across borders. Since then, WFMH and similar organizations have been observing it the same day every year. It is also supported by the United Nation’s World Health Organization (WHO) and its many clients and sister organizations in coordination with Ministries of Health and civil services all around the globe.

Although it was first celebrated under the leadership of Richard Hunter, who was WFMH Deputy Secretary General at the time, it had no particular theme. Rather it had the generic goal of spreading awareness about mental illness, promoting mental health and educating the public about it. However, in 1994, then-Secretary General Eugene Brody first suggested that a theme be adopted every year to work on a particular aspect. The first theme for this cause was “Improving the Quality of Mental Health Services throughout the World”. Since then, WFMH has adopting a new theme each year. Some of the prominent themes adopted for World Mental Health Day include “Mental Health and Human Rights” in 1998, “The Relationship Between Physical & Mental Health: Co-occurring Disorders” in 2004, “Mental Health and Chronic Physical Illnesses” in 2010 and “Mental Health Promotion and Suicide Prevention” in 2018.In 2019, the themes is “Mental Health Promotion and Suicide Prevention”.

As the world changes around us, human beings are facing new challenges each day. Failure, grief, stress and mental pressure are forcing many people to succumb to suicidal thoughts. This challenge is growing bigger every day. It is estimated that about one in 5,000–15,000 people dies by suicide every year,  which is about 1.4% of all deaths, with a reported global rate of 10.7 per 100,000 people in 2015 — up from 11.6 in 2008. This year the aim is to shine a light on this critical problem, educate the public and encourage people to open up about their mental problems — in a bid reduce suicide. At the end of the day, mental health is a major issue in our personal lives. One cannot expect sound physical fitness without sound mental health. Thus we observe this day each year with hopes to support people that are in need of help to live a more meaningful life.