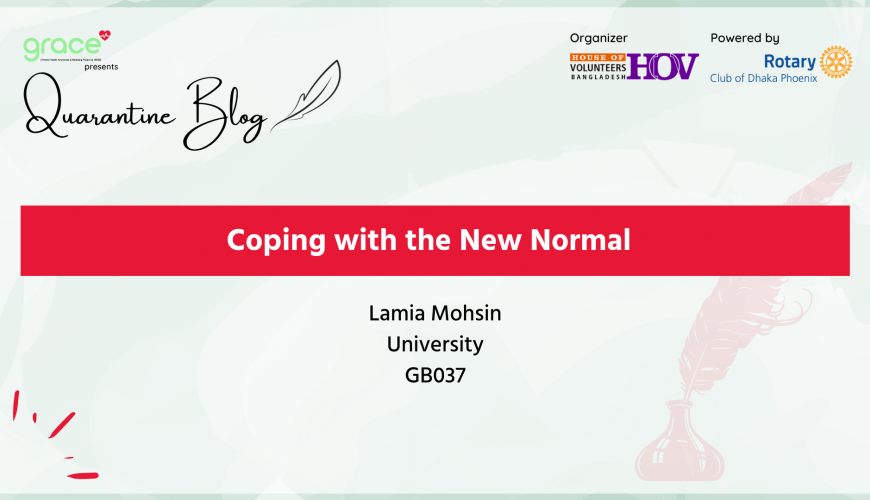 Coping with the New Normal

In the past few months, our lives have undergone radical changes, and personal observation is that the collective identity of mankind has been caught off-guard like never before. Global behemoths spend billions of dollars every year, in their endless quest to make more money by capitalizing on toxic, unbreathable air, destroyed forests and habitats. And yet, who could have thought that a submicroscopic parasite would so unabashedly reveal our naked vulnerabilities, all hidden behind fallacies of supposed human progress.

For me, the lock-down has been all about trying to adapt to a new lifestyle. I could see a radical change in my daily routine –in terms of food habits, sleep cycles, and work patterns. It took me some to cope with the new norm of inhibited mobility.

As of 21st-century social beings, it is extremely difficult to keep ourselves confined to space since minimal human interaction is not something we are used to. There were days when my productivity reached new heights, and there were times when I would stare blankly at the whitewashed walls of my room while a strange hollowness engulfed me.

But what started off as a struggle to cope with confinement resulted in a discovery of remarkable alternatives. Soon enough, I realized that the lock-down was a great opportunity to spend time with family, explore old hobbies and reconnect with friends. I had the luxury of waking up a little late in the morning, snuggling with my cat more often, taking a lazy stroll on the lawn during the afternoon with my grandmother, looking up indulgent recipes online, and attempting to cook up a storm in the kitchen. Suddenly, I had enough time to clean up the clutter in my study table, start reading the books on my ‘To-be-read’ list, do a cover of my favorite 90s songs – basically things which I had been planning to do for ages, but somehow never wound up doing.

But irrespective of my individual efforts to maintain a positive attitude, I was constantly aware of the suffering and miseries of people around us. It was from this retrospection that the idea of helping those hit hardest by the pandemic emerged. Thus, the campaign ‘Chinnomulder Pashe Amra’, was born. Through this initiative, my team and I were able to reach out to more than 400 families across remote areas of the country.

Experts have opined that Covid-19 will leave a world dictated by a ‘new normal’, and it is our sincere hope that mankind, battered and exhausted from fighting a deadly disease learns its lesson. We must realize that burgeoning economies and soaring GDPs aren’t simply enough to carry the burden of a dysfunctional healthcare system, and superficial numbers in the form of per capita income are of no use if there aren’t enough ICUs, ventilators, and oxygen cylinders to give us respite when we are battling for dear life.

We should not be caught off guard again. We simply cannot afford to be.